On April 14, 1912 the RMS Titanic hit an iceberg in the North Atlantic. It sank less than three hours later in the early morning of April 15, 1912.  The sinking of the RMS Titanic may feel distant in time and place but Green Bay has deep connections to the disaster.

Dr. William E. Minahan, who died on the Titanic, is buried in a crypt in Woodlawn Cemetery, visible from Riverside Drive.  Dr. Minahan was traveling home from Europe with his wife, Lillian, and sister, Daisy, after an extended vacation abroad.  The Minahans had planned on sailing home sooner but a coal strike prevented their intended ship from leaving.  They thought they were lucky having been able to book first class tickets on Titanic, but history would prove otherwise.

On the night of the sinking, Dr. Minahan put his wife and sister into a lifeboat telling his wife, “Be brave.  No matter what happens, be brave.”  Those were Dr. Minahan’s final words.  His family received news on April 27, 1912 that Dr. Minahan’s body, one of only 340 of the nearly 1500 that perished, had been recovered.

Dr. W.E. Minahan had many siblings, some of whom lived in Green Bay.  You may recognize the Minahan name; the Minahan-McCormick Building, owned by W.E.’s brother John, was a prominent Downtown Green Bay building until it was razed in 1984.  Another brother, Robert, was also a physician in Green Bay.  Sister Daisy, who survived the Titanic, was a popular school teacher in Green Bay.

Much lore surrounds Dr. Minahan’s voyage and death on the Titanic.  Before their trip abroad, it's said that a fortune teller told him he would die on his second trip to Europe, a prediction he took seriously enough to buy a larger life insurance policy.  Decades later, in August of 1987, the family would again be struck by tragedy.  Dr. Minahan’s crypt in Woodlawn Cemetery was robbed. 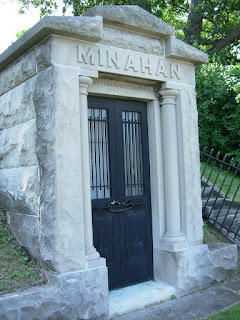 The next time you're in Green Bay driving down Minahan St. or past where the Minahan Building once stood, take a moment to remember Green Bay's personal connection to one of the great tragedies of the twentieth century.