What makes someone a hero? Is it their selflessness and empathy? Their instinct to help others? If these are the requirements, Alydia Braskamp exceeded all of these characteristics. She proved her compassion and courage through her service in World War I, working as a nurse under Dr. Bellin, and the creation of the Baby Health Center. 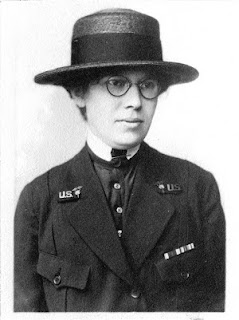 Alydia was born in Alton, Iowa in 1883 and moved to Green Bay in 1917 when she was 34 years old; but she did not stay long. The First World War had started, and she was called away to serve with the Red Cross. Alydia was stationed near Bordeaux, France. As a woman in the early 1900s, Alydia was given work as a nurse in an operating room and with ambulances. She also did some field work and documented the experience through a photo album, which the Neville cares for as part of the Collection.  The photographs show devastating scenes after attacks, the morgue, ceremonies, and life at the base. In France, Alydia assisted the war effort, served those on the battlefront, and documented a critical point in history. She was left with lasting sinus issues caused by sleeping on the dusty ground in France. 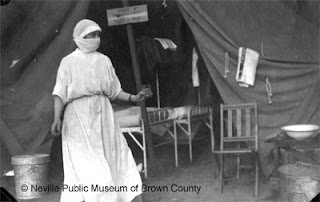 After being honorably discharged in 1919, Alydia returned to Green Bay and began working as the Assistant Supervisor of Nurses and Instructor at the Deaconess Hospital School of Nursing (now Bellin College). She eventually established the Baby Health Center which provided care for infants and advice for new mothers in the area.

The hardship and horrors that Alydia saw during the war made her more determined than ever to provide care and courtesy to the people around her. Her dedication on the field in France carried over to her life in Green Bay.  Alydia spent the rest of her life serving the Green Bay area and improving the quality of life for its residents.  She is just one of the many nurses whose dedication and selflessness have helped shape our community.