This military coat dates back to the 1840s and belonged to Morgan L. Martin.  Martin held several different posts in Green Bay including Indian Agent, Judge, and Captain of the Green Bay Rangers.  This is Martin’s Green Bay Ranger jacket. 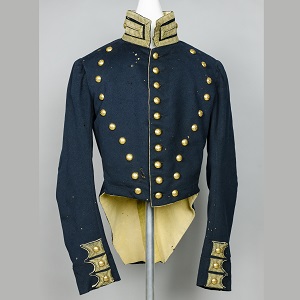 The preservation of this artifact is important not only because it belonged to Morgan L. Martin (1805-1887) but also because of its association with the Green Bay Rangers.  Martin came to Wisconsin in 1827 and became a prominent civic leader in the area.  In 1836, Governor of the Wisconsin Territory, Henry Dodge, created an organized militia.  Gov. Dodge claimed that there was danger in the defenseless borders of the territory and that there were threats of armed conflicts with natives.   He proposed that there should be one company of cavalry troops in each territorial county.   March 5, 1837 may have been the first commissioning of a Wisconsin militia field commander as Dodge designated Morgan L. Martin as Captain of the Green Bay Rangers.  The Rangers were a mounted rifleman unit.  This is also believed to be the birth of the Wisconsin National Guard. 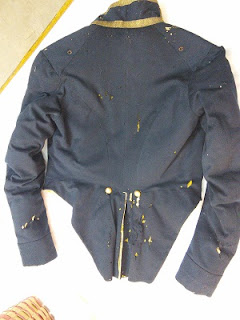 This Green Bay Rangers coat has been in the museum’s care since 1935.  While we’ve taken care of the coat for over 85 years, time sometimes takes its toll on textiles, leaving areas of loss (the holes you see). 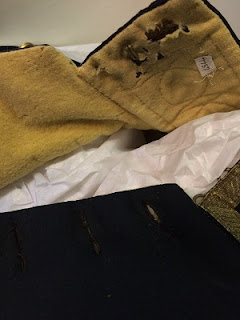 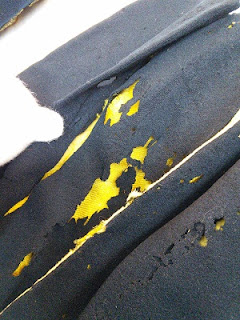 The coat was sent out for conservation in 2016.  Thanks to a grant from the Green Bay and De Pere Antiquarian Society, the coat was sent to the Midwest Art Conservation Center.  The work kept these areas of loss from getting bigger and preserved the structural integrity of the jacket.  The conservation team also created a pattern of the coat which will help us create a replica in the future.  Both the conservation and pattern help us preserve this piece of Green Bay history for future generations.

This project would not have been possible without the Green Bay and De Pere Antiquarian Society.  We thank them for their shared interest in preserving our local history.