Imagine moving to a new city for a dream job. The first thing you do is look for a place to live. What do you do if you can’t find one? This is what African American players faced when they moved to Green Bay. Jim Crow laws and racism were most evident in the South, but racism was also present in the North. For example, a De Pere development barred African Americans and Jewish people from living there in 1948.[1] This was only two years before Bob Mann (the first African American player to start for the team) joined the Packers.

With few places willing to rent to them, African American players were forced to live in small cabins, the YMCA, and hotels. Some even stayed in a room at an extermination business owned by former player Tony Canadeo’s brother.[2] When Herb Adderley came to Green Bay, he lived in the “little shack down by the tracks.” In 1961, Adderley, Davis, and Pitts shared a one-bedroom place on Velp Avenue.[3]

African Americans living in Green Bay faced many of the same challenges whether they played football or not. Housing was hard to find without facing discrimination. For example, in 1959, the Wisconsin State Reformatory hired Joseph Harris, an African American social worker. Joseph met discrimination when attempting to buy a home in Green Bay.[4] He was also subject to race-based harassment. Harris said in a Green Bay Press-Gazette article: “[t]here would be rotten eggs and vegetables on my porch in the morning. Once someone painted ‘nigger go home’ on my door. But a deliveryman washed it off.”[5] 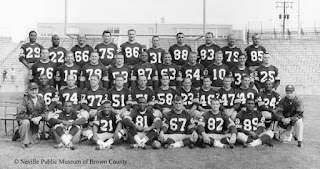 Coach Lombardi did what he could to help ensure decent housing for his players. Things started to change when the Fair Housing Act was passed in 1968. The act prohibits discrimination concerning the sale, rental, and financing of housing based on race, religion, national origin, or sex.[6] While both Lombardi’s help and the Fair Housing Act were steps in the right direction, it was still difficult finding a place to live in a predominantly white community.