Moving from New York to Green Bay in 1959 was a bit of a culture shock for Emlen Tunnell. Housing, as always, was hard to find. Tunnell ended up staying at the Hotel Northland in downtown Green Bay during his two seasons with the Packers. It is rumored that Coach Lombardi even paid for the room and board.


Coach Lombardi brought the New York Giants veteran player with him when he took the job in Green Bay. Not only was Tunnell a seasoned defensive veteran, he was also a well-respected leader on and off the field. He assisted Coach Lombardi in changing the mindset of the team and led the defense. He also aided in bringing other talented black players to Green Bay. 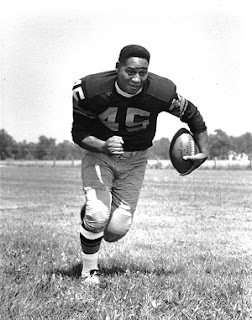 “Em was a very bright guy who helped me tremendously. He had been around so long, one of the first black stars in the league, and for me just to have the opportunity to hang around him, I was awed by that.”- Willie Wood

Tunnell played for Green Bay for three seasons after which he became an NFL scout. In 1967, the Pro-Football Hall of Fame inducted Tunnell making him the first black player to receive the honor.

“Emlen was a pretty special guy,” Kramer said. “He was a pro’s pro. He was a classy and bright guy as well. Emlen was a fierce competitor. He also helped tutor the young defensive backs like Willie Wood and Herb Adderley.”- Jerry Kramer
Black History Month Football Green Bay Packers National Football League