With Valentine’s Day right around the corner we wanted to share a love letter from Fort Howard written in 1826. Unfortunately, this letter isn’t all hugs and kisses. Lt. Loring’s “dear Caroline” never received this letter that was given to John Lawe for delivery.

Caroline, the 16-year-old daughter of the fort’s Commanding Officer, Major William Whistler, was being courted not only by Lt. Loring, but also Lt. Bloodgood. In the end, Caroline never received the letter and married Lt. Bloodgood. This water stained letter in our collection is all that remains of Lt. Loring and Caroline Whistler's short-lived romance. 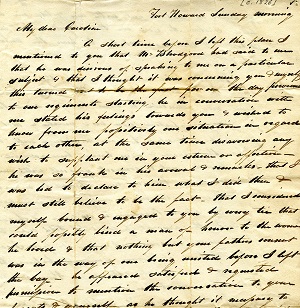 Read the letter for yourself below!

A short time before I left this place I mentioned to you that Mr. Bloodgood had said to me that he was desirous of speaking to me on a particular subject & that I thought it was concerning you and myself this turned out to be the fact for on the day previous to our regiment’s starting, he in conversation with me stated his feelings toward you & wished to know from me positively our situation in regard to each other, at the same time disavowing any wish to supplant me in your esteem or affection- he was so frank in his avowal & remarks- that I was led to declare to him what I did then & must still believe to be the fact- that I considered myself bound and engaged to you by every tie that could possibly bind a man of honor to the woman he loved & that nothing but your father’s consent was in the way of our being united before I left the bay- he appeared satisfied and requested permission to mention the conversation to your parents and yourself, as he thought it necessary to account you and them for discontinuing his visits and attentions which from regard to me he intended doing.  I told him I had no objection to his telling you what I had said- but being fearful that your mother would be offended and probably make your time more disagreeable, I requested him not speak to your parents on the subject & continue his visits as usual.

Yesterday he walked out with me and told me that he had spoken to you on the subject a few days after I left- & that you stated to him the amount of what follows-  “That you did not consider that there was any engagement between us- that I had formerly been very attentive to you, but for some time past had neglected you very much- that your parents had objected to your marriage with me & for this reason & your having been advised by your friends not to connect yourself with me, you had concluded that we never should be married & in fact considered me as only a common acquaintance”

The above, Caroline, is as near as I can recollect the amount of what he told me- but I shall make no comment upon it for I cannot unless I hear from yourself believe that you are so much altered- there must have been some mistake.

I must see you if possible Caroline & immediately, therefore I wish you to make some arrangement to pass the evening from home& inform me what I shall meet you- say at the doctor’s, or you might walk in the garden with Rachel and your Cousin Abbot-

Nothing that may happen will ever change my feeling towards you & believe me my dear girl,

Yours as truly as ever,