Attack on Pearl Harbor and a Wedding Dress

“December 7, 1941 A Date Which Will Live in Infamy” – President Franklin D. Roosevelt

The United States entered World War II after a devastating attack on Pearl Harbor by the Japanese on December 7, 1941.

The war affected everyday life in the United States, this wedding dress is one example. Katherin Pierick Williams wore this dress when she married U.S. Navy photographer Alan North Williams just three weeks after the attack.  Williams was at Pearl Harbor during the attacks. He survived and even took photographs of the events.

The dress is part of the Neville Public Museum’s collection and the photographs are cared for by the Wisconsin Historical Society. You can see the two together and more stories like this in “Guns and Gowns” open through February 2021. 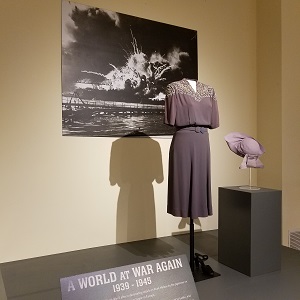 This war changed the entire structure of the fashion industry.  Paris fell to the Germans in 1940 and no longer inspired American and British designers.  Britain, feeling the harsh effects of the war, struggled to design new fashions. But Hollywood continued to inspire American designers.

The NY Dress Institute designed this dress. The Institute was formed before the U.S. entered the war in 1941 to promote New York as the fashion center of the world, especially since Paris was under control of the Germans at this time.