Over the course of my time with The Neville Public Museum I encountered many interesting characters of Brown County’s past. However, none fascinate me more than the Dale Kuipers (1947-1996). From comic book creatures, movie monsters, and flowering flora, Dale created sublime works of art and Hollywood special effects.

I had the privilege of becoming familiar with Kuipers resulting from my work on a temporary Neville exhibition, Dale Kuipers: Green Bay’s Monster Maker. Unfortunately, learning about Dale was not the easiest task. Due to union conflicts most of his Hollywood film work goes uncredited. Further records are sparse and scattered. Luckily, the Neville provided me a wealth of resources for research. Therefore, I find it befitting to share some of what I found.

Throughout his youth Kuipers constructed dinosaur models in his parent’s basement. Using these models he filmed Infant Earth, a creation story documenting the formation of Earth’s life. Another project of his, Two Faces of Venus, gained Kuipers national attention through Associated Press. Into the 1970s, Dale worked for several nearby haunted houses, most notably Mackinac Island’s The Haunted Theatre. 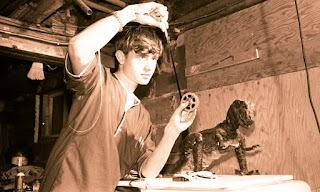 Opportunity presented itself to Kuipers in 1979 when Universal Studios began filming Somewhere in Time on Mackinac Island. After showing the special effects department his haunted house monsters, Kuipers acquired letters of recommendation to supplement his portfolio. With such recommendations, Dale launched his Hollywood career. Within weeks, Roy Arbogast of Jaws fame reached out to Kuipers and brought him to Hollywood as the Special Effects Sculptor on Caveman. The film allowed Dale to implement his dinosaur expertise and to establish his reputation. Through Rick Baker, Kuipers landed a second job working with Rob Bottin on The Howling. Together the two set out to reimagine the portrayal of werewolves in film. Unfortunately, petroleum distillate poisoning ailed Kuipers and forced him back to Green Bay for recovery.

Months after his return, John Carpenter signed on Kuipers to design a monster for The Thing. In contrast to the movie’s final monster, Kuipers believed his was more biologically sound and its origins more fleshed out. Work stopped after Kuipers sustained major injuries and Bottin replaced him.

Back in Green Bay, Kuipers remained active amongst the local art and film communities. Working from his Skylight Gallery on Washington St., he collaborated with theater groups, films, haunted houses, and community events. Despite his fantastical monsters, pastel landscapes were Dale’s true love. He remarked that monsters paid the bills so he could pursue more serene scenes. Battling spats of poor health, Dale passed away in July, 1996.

To describe Dale as “fascinating” is an understatement. Through triumphs and trials, Dale continued his passion for art and special effects until death. His imagination opened new worlds and introduced wonderful creatures to his audiences. One must experience his work firsthand to catch a glimpse of his brilliance.